For anyone who has updated a v8 site to v9rc, or who has been testing/updating addons for v9rc, this is a quick poll on how compatible addons and themes are out-of-the-box.

To be clear, this thread is not interested in what changes were necessary or what the addon was. All I am asking for at this point is a count of addons/themes and what happened. If an addon or theme matched more than one of the below, count it against whichever was the most severe.

Please report as concisely as possible. Total number of addons + themes in each of these categories. It doesn’t matter whether you developed them or they were developed by a third party; proprietary, marketplace and elsewhere. You don’t need to be a marketplace developer to post a count here.

My own addons I have been updating:

They and each one broke the whole site completely, both the frontend and backend. Until I changed all $this->app->make(xxx::class, []) stuff. That allowed the rest of the site to work. But any page with the package crashed due to missing assets. After that functionality was disabled, the pages showed up but obviously without JS functionality and looked ugly as hell with the default Boostrap styling.

So I’m not sure what’s gonna be easier and less messy: rewriting all HTML, CSS and JS from scratch or trying to find it all and replace it. I gave up on v9 for the time being. It’s gonna be an awful f*** around to bring all v8 packages to v9.

Its a mystery to me how this is going to work, the official word is V9 is backwards compatible, that may well be true for core, but when people start updating from V8 to V9 and all their themes and add-ons break, they are going to feel rather pi$$ed off.

Come on folks, post your results!
I know there are many more developers and site owners testing v9rc. We need to hear of any good results as well as those with issues. You don’t need have to completed updating a site or package. This is only about the immediate consequence of updating to v9 or installing with packages not specifically updated for v9.

Of the 12 add-ons we have in the marketplace which I’ve updated for V9:

Beyond the marketplace, I’ve updated maybe another 6 or 7 private add-ons.
Some are quite simple and just work, whereas others have taken a lot of time, mostly on dashboard and editing cosmetics. I’ve not actually tested any of our custom themes at this point, but I’m not expecting issues.

But the main thing I’ve tackled was updating Community Store, which is effectively V9 compatible now in the master branch. There might be a few remaining details to address (in obscure features), hence why I haven’t put out a release yet, but it’s mostly done. There are some new dashboard components, like how to handle search fields, so I’ve been trying to implement those as well.

For Community Store I really didn’t hit any structural issues, it was 95% cosmetic problems. I have been able to adjust the codebase to simultaneously support V8 and V9.

The main things I encountered were:

I’m really liking V9 (and I rambled about this here), and we’re really looking forward to using it. But I’d be lying if I thought it was going to be a seamless transition in terms of add-ons and themes - without all marketplace developers reviewing and updating their add-ons I’m concerned it’s going to be pretty messy… we’ll not be updating client sites with lots of marketplace add-ons for quite some time because of this concern.

When they didn’t work it was mostly due to either:

2 plugins required a specific third-party class that was removed from the core so that’s another problem to fix entirely.

For one I just added the class to the packet.

For the other it’s going to require some rewrite

+1 for sorting out tabs, the new way seems to require a lot more code for the same result.

I have update all my marketplace packages for c5.9 (they are waiting for release in public/private repos).
I updated them when RC3 was available. If something was fixed/changed in RC4 or later I will just make changes when 9.0 will be released.

I have decided to not support c5.7/c5.8 with latests version of packages and set minimum requirement to 9.0.
Transition from bootstrap3 to bootstrap5 sounded like something that is not 100% backwards compatible (although I still very much appreciate moving to b5).

At this point everything works, but of course there are still some glaring ui styling bugs

If I don’t add any class, “form-select” will be added automatically and input will by styled properly.
This behaviour caused most eyesore styling bugs in my addons, because I often add custom classes to inputs.

a) I would probably add some backward compatibility for input groups (I used them quite a lot).
b) Deprecated stuff like wells are “take it or leave it” for me, I would just style them by myself.
c) Bootstrap3 checkboxes look fine (though I think they don’t look exactly the same as proper botstrap5 checkboxes) .
d) B3=>B5 transition upped css breakpoints on level up, so that’s not something that can be fixed, but I think impact is quite minimal.
e) I had some “btn-default” classes which I had to replace with “btn-secondary” (another backward compatibility candidate).
f) You can add backward compatibility for pull-right/pull-left
g) Bunch of icons were missing, I had to replace them with proper ‘Font Awesome 5 Free’ classes.
h) Grand Gallery is private repo, but you can see what I have changed in commit history of free addons: 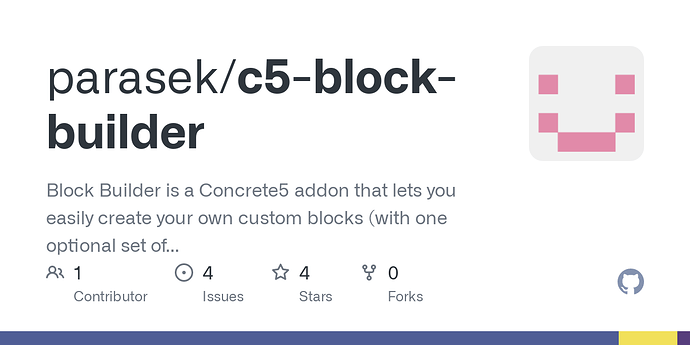 Block Builder is a Concrete5 addon that lets you easily create your own custom blocks (with one optional set of repeatable entries). 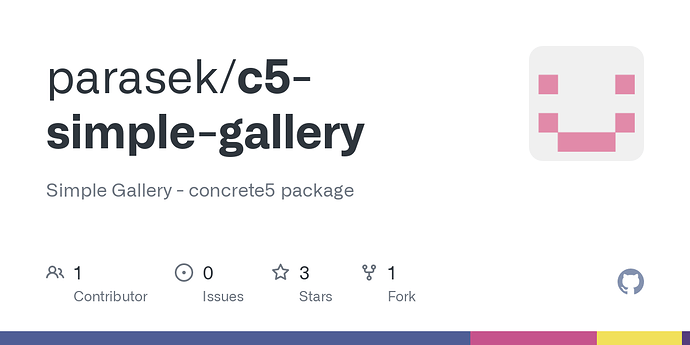 Keep in mind I don’t plan to make latest versions of addons compatible with c5.8/c5.7.

And for statistic funsies, this is the time I devoted to updating them to c5.9:
Grand gallery: 16 hours
Block builder: 20 hours
Simple gallery: 1,5 hour

Created a package with Queueable jobs for v8, tried to test it in v9 and… jobs are no longer used in v9. Now it’s tasks instead. WTF?! As always no Documentation on tasks whatsoever.

I thought I recalled @andrew saying jobs would remain in v9 for a while WITH tasks ?!

To handle tabs, what I did was do a check for anything under v9, to work out if a prefix to the class is needed:

and then add the prefix on each tab-pane:

Most of our interfaces were broken due to the transition to Vue. We reworked those to Vue and got all but one fixed/working without much of the main functionality breaking. There is still one add-on we cannot fix due to the Concrete Core piece still not being converted and working for v9. I created an issue for this, but it was closed and it has yet to be done.

We also have a job in a plugin and are waiting on documentation on updating it to a task.

Jobs will remain, along with tasks – we don’t want to break backward compatibility just because. Tasks are definitely better in a variety of ways, but Jobs should continue to work. We will get documentation on tasks soon.

Well, ZendQueue in not in v9. +1 for the fact that v9 is NOT backward compatible with v8.

How many more libraries would I have to load myself to make v8 packages run on v9? Why can’t they simply leave the v8 stuff there in their latest version for backward compatibility?

I rapidly lose interest in v9 with so many compatibility problems piling up. I expect new versions of the core should make life easier for developers, not make it a nightmare. v9 for package upgrades is not a spanner in the wheel, it’s a huge piece of rail thrown in.

We need to remember that the purpose of a release candidate and beta test is to find such issues as we are identifying here.

If the v9 core is subsequently improved prior to official release to prevent such issues from occurring, both by resolving incompatibility and by protecting sites from un-fixed incompatibility, then the beta test has achieved its purpose.

In order of priority

With the above in mind, v9rc4 has fallen a long way short of readiness for release. We need at least a v9rc5 to demonstrate (1) and (2) before an official release version should be contemplated. If @frz can get the v9 developer documentation out with v9rc5, that will both encourage developers and make the whole process less fraught.

I couldn’t agree more with your points here John, as well as the ones in that github thread.

I understand the desire to try to get V9 ‘out there’, being seen and used asap, but if these backwards compatibility issues aren’t mostly resolved it’s going to be a real mess.

By resolved, that might be either V9 being modified to support some more backwards compatibility (e.g. tabs) or add-on developers updating their add-ons - it can’t all be on the core, but it has to be one or the other.

Ultimately I think there should be a significant delay before V9 is offered as an upgrade via the dashboard as a one-click operation. Someone could still manually update their site if they wanted to, but my concern is the type of user who just updates anytime there’s a new version available.

I’m very fearful that we’ll have clients email through to say their website is broken or looks very strange, to find that they’ve triggered the V9 update themselves, before we’ve had a chance to run through an upgrade test run. We’ll then either have to restore their sites from backups, or scramble to fix what we can on a live site.

There needs to be some sort of critical mass of add-ons that are V9 ready before opening that up, or something that is actually flagged in the marketplace and/or add-ons themselves.

Stability is hugely important here, and much more important than the ability to upgrade.

There is generally an expectation that major version upgrades of any software have caveats regarding backwards compatibility - so it wouldn’t be seen as a negative that upgrading to V9 from V8 requires an extra series of checks before saying it’s ok to do so. And if those checks come back to say ‘don’t do it, some add-ons will break’, that’s a good thing.

A well functioning V8 site is 100 times better than a broken V9 site.

I can’t remember, has there been a mass email out to all marketplace developers that ‘V9 is coming, we need you to update your add-ons’? Perhaps there needs to be another one?

Have the most installed, say, 30 add-ons from the marketplace been tested to work correctly on V9?

Have the most installed, say, 30 add-ons from the marketplace been tested to work correctly on V9?

+1 for that as a test. A set of test sites with the most popular (free and paid) addons & themes needs to be maintained and tested against every core upgrade. It would also be a good test of @frz’s new containerized quick spin-up hosting package, so serving multiple purposes.

(I expect some of the free addons/themes with most downloads would be buggy even on v8.5.6)

It doesn’t take an experienced developer to do such a test. Developer experience is only needed to analyze when the test fails.